Taxpayers have spoken and defeated the $35 million referendum that had been unanimously recommended by the Prior Lake-Savage School Board. The referendum failed for a number of reasons.

First, taxpayers see no accountability in the district – proficiency test scores of our students continue to decline even after giving the district more than $100 million in 2017 via a bond referendum plus a 37% increase to the cost/student operating levy. Giving every teacher and student a new personal device every four years or so isn’t going to reverse the poor proficiency trends.

Second, the school district continues to waste significant time and money on professional development for its staff related to social justice ideologies (such as culturally responsive teaching, social emotional teaching and using principles/tenets closely tied to critical race theory). By getting back to teaching the basics of reading, writing, math and science and stopping the social justice indoctrination will increase student proficiency scores.

Third, the district is not managing its finances prudently. Wanting to increase annual pre-COVID technology expenditures by more than 50% isn’t prudent. Paying consultants such as Nexus Solutions more than $24 million dollars over the past 10 years including more than $16 million since the 2017 referendum to manage facility projects is simply crazy and not prudent.

According to my calculations, the district’s government-wide expenditures during the past 5 fiscal years have grown at a compound annual growth rate (CAGR) of 5.8% while ADM (average daily membership, also known as enrollment) has grown at only a 2.2% CAGR during that same time period. Even accounting for inflation, expenditures growing that much faster than enrollment is a sign that finances are not being managed properly.

Given those reasons, and others such as the controversial Commitment to Equity and Inclusion resolution passed by the school board late last year and the School Board’s dictatorial mask mandates for children rather than giving the choice to parents as to whether to mask their children, it is no wonder why the majority of taxpayers were not in the mood to give the district more money to spend.

Please read more at the Prior Lake American ⬇️

In support of local businesses that create jobs, boost our local economy, and preserve our community, Mayor Kirt Briggs proclaimed Nov. 27, 2021, as Small Business Saturday in Prior Lake.

To help you rediscover your favorites and find some great new local businesses, the City is launching a new interactive map featuring everything downtown Prior Lake has to offer!

Make plans to shop small this Saturday – and when you’re downtown, scan the QR code on any of the new promotional street signs to use the map on your mobile device.

New interactive map featuring everything downtown Prior Lake has to offer! ⬇️

WHY DID THE PLSAS SCHOOL REFERENDUM FAIL?

School District 719 is an affluent district of over 30,000 registered voters, residents who place high priority on the education of children. Why then did only 3,496 of those registered voters cast votes in support of the Tech Levy Referendum that was recommended by the District Superintendent, and unanimously approved by the School Board? An obvious conclusion might be that there is a disconnect between elected Board members and their constituents.

The School District’s website proudly displays a claim that 92% of parents (of 8,850 enrolled students) rate our staff as excellent or good. While I have no insight into how the School District office arrived at the 92% figure, I have no doubt there is a high level of respect for the teachers in our District. Yet, only 3,496 of over 30,000 registered voters went to the polls to support the referendum, that was proposed and promoted by School District leadership. Doesn’t this suggest a serious lack of public confidence in fiscal management and oversight in the District?

Of various fiscal issues that might be cited, the most conspicuously glaring is the disclosure that Nexus Solutions (Nexus), the District’s consultant on facility projects, has been paid about $25 million since initially hired. While numerous questions have been raised regarding the District’s relationship with Nexus, including the circumstances under which Nexus was hired, there have been no forthright or factually meaningful answers.

Prior to the 2017 referendum at which time Nexus had already collected about $10 million from the District, CAG (Citizens for Accountable Government) raised concerns about Nexus involvement. CAG’s request to meet with the Board to discuss the concerns was simply denied. As CAG made its concerns public, District leadership responded in a somewhat predictable manner, not by addressing the questions being raised, but instead by attacking the credibility of CAG. The Chair of the School District, in a letter to the editor of the Prior Lake American, falsely claimed that CAG had hired a nationally known anti-education consultant.

Prior to the 2017 referendum vote, CAG distributed a brochure to School District residents citing specifics about the School District/Nexus financial relationships. The brochure stated that “If the referendum passes, Nexus receives an estimated $13 million revenue, in addition to approximately $10 million they received since hired”. The brochure highlighted specifics about fees previously authorized for Nexus, like $426,511 that the District’s Finance Director authorized for consulting services related to AstroTurf. CAG’s concerns were summarily ignored and dismissed by School officials.

I encourage residents in our School District to read the District’s press release titled Voters Reject PLSAS Technology Levy Request, https://www.priorlake-savage.k12.mn.us/uploaded/Communications/FAILS_Press_Release.pdf In the press release, Superintendent Staloch is quoted as stating “We now need to learn why our community voted no” on the Tech Levy referendum. I hope Ms. Staloch will read the commentary above and consider that the words may have some merit.

NEXUS, the School District’s consultant of choice has now been paid a total of $24.96 million as of January this year. Those are dollars for consulting, not dollars for material or labor for the projects that NEXUS recommends, and then collects a percentage of the total project cost. With the School Board asking for another 35 million, it seemed appropriate that taxpayers should know where their tax dollars go before dipping into their wallets again. For that purpose, Wes Mader who has been a columnist for the Prior Lake American for several years, submitted a column on Monday, October 18, that included verifiable facts regarding the District’s spending. The editor rejected the column.

Since we still believe that taxpayers should know how their tax dollars are being used, we have included the column that the Prior Lake American rejected. We bet you’ve never seen anything in the District’s newsletters or the American about how much NEXUS or other District consultants have been paid, but it is supposed to be public information. To bad the American won’t do some digging to find out and report, instead of censoring those who do.
By Wes Mader Oct. 19, 2021

Four years ago, voters approved a facilities bond referendum well in excess of $100 million, plus a 37% increase in the cost/student operating levy (dollars useable for teacher salaries). How soon we forget! What was supposed to be more than enough to meet future District needs, quickly became not enough and some teachers were terminated.

What taxpayers should know but haven’t been told, is that Nexus, the District’s consultant that planned and oversaw the referendum facility projects, has been paid $24.96 million since initially hired. This seems outrageous, considering that the $24.96 million did not pay for materials, labor or maintenance for a single square foot of facility space. What it did pay for was “technical services”, like the $426,511 authorized by the District’s finance director, for Nexus to consult on the purchase of AstroTurf for athletic fields. Numerous other examples are equally disturbing.

Tax payers are being asked for another $35 million for a stand-alone restricted technology fund. One stated purpose is to divert technology dollars historically included in the general fund, to other uses. How’s that for strategic planning? If $35 million is more than needed, the excess dollars can be used for anything “techie” like the latest and greatest iPads, but can’t be used to hire or pay teachers. Technology is absolutely vital to our Schools, but arbitrary spending is not.

Voters can vote YES or NO to the School Board’s request at a special election in just a week and a half, November 2. Based upon what I’ve heard in public, many residents, particularly those without school-age children, are totally unaware of the upcoming referendum. District Board members know that by scheduling the referendum in this off-election year instead of next year during general elections, voter turn-out will be minimum. This says something about the Board’s respect for District taxpayers.

Based on what I hear from parents who are engaged with School District staff, teachers are frustrated by increasing class size and demands, while needed support is being diminished. It seems that millions spent since the 2017 authorized major spending increases, accomplished nothing in terms of helping teachers going forward. Teachers are front-line workers in a fight to educate kids during very challenging times. They deserve community support (and the School Board’s), instead of a tangential and distracting effort to squeeze more dollars out of taxpayers.

Hopefully all agree the purpose of our public schools is to assure children are getting an education that prepares them for a lifetime in an ever-changing world (including skills to earn a living), and hopefully all agree that it can and should be done cost effectively. If yes, can’t we agree that success should be measured by results versus cost, like in the real world of business. However, School records regarding student performance versus cost are disappointing.

While proficiency in reading, math and science are critical for student development, tested proficiency levels of PLSAS students in these subjects for all grades over the past five years, shows continuous decline. While lack of in-school learning is partially responsible for last year’s performance drop, be reminded there was continuous decline before the pandemic. According to the latest available data from student testing this past spring, 41% were non-proficient in reading, 44% were non-proficient in math and 46% were non-proficient in science. While I have no basis to offer opinion on the validity of testing, the results shouldn’t be swept under the rug.

Spending data over the past five years is equally disturbing. Audits show District expenditures grew from $85.3 million in 2017 to $108.2 million in 2021, a 27% increase while student enrollment (reported in “pupil units”) increased by only 5%. For perspective, don’t forget that the past justification for $100+ million (2017 bond referendum), was to accommodate student population growth, that has turned out to be only 5 percent over 4 years. Also don’t miss the fact that dollars spent per pupil went from $9,285 in 2017 to $11,290 in 2021, an increase of 22% in 4 years while cumulative inflation was only 10.9%.

Readers can draw their own conclusions from the above data, but in my past business world, progress was measured by what was accomplished for dollars spent. Too often it seems that when tax dollars provide funding, those responsible for spending like to measure progress by how much money can be thrown at a project, instead of by results. Costs climbing while student performance is declining–this does not indicate positive progress. 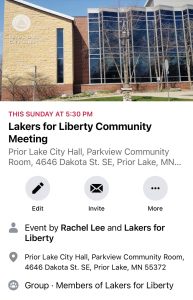 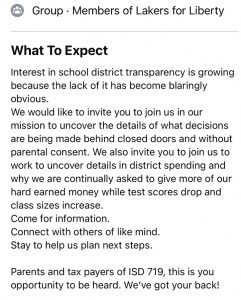